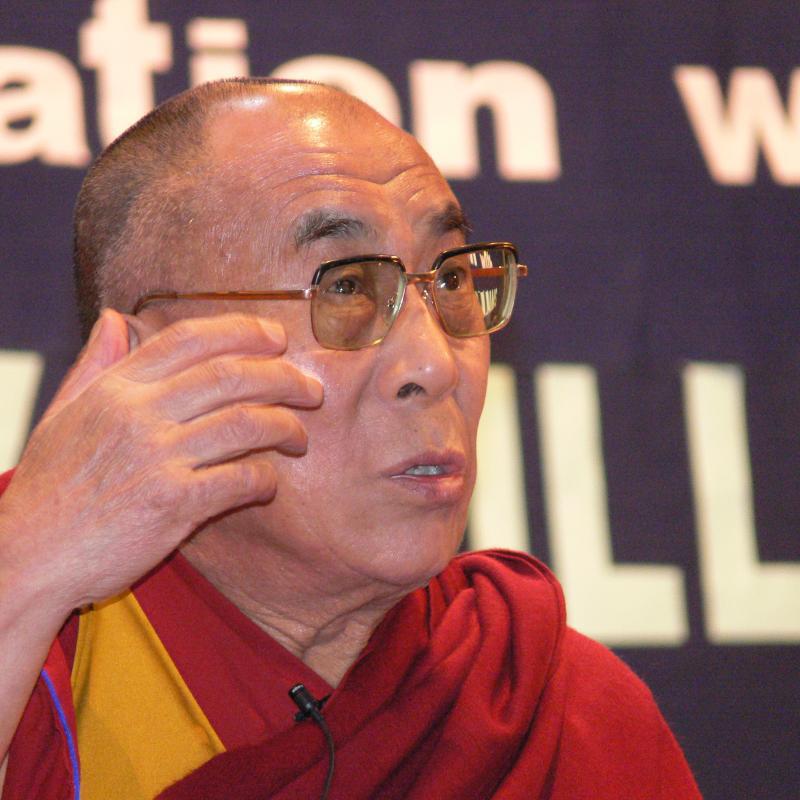 1989 Nobel Peace Prize-winner for his efforts to resolve the Tibetan conflict peacefully and for being a global man of peace and advocate for the environment.

The Dalai Lama received the Nobel Peace Prize in 1989 for his non-violent efforts to resolve the Tibetan conflict and for his worldwide role as a man of peace and an advocate for the environment. His Holiness has been the religious and political leader of the Tibetan people since China's occupation of Tibet in 1959.

LhamoThondub was born in 1935 to a peasant family in Taktsar, a small village in Tibet. When he was three years old, monks and men from the Tibetan Government visited Taktsar in search of the reincarnation of the previous Dalai Lama. Dreams and visions led them to Lhamo, who passed their tests and began his studies among other monks.

In 1950, the newly established Chinese Communist regime decided that Tibet should become a permanent part of China and launched an invasion. In response, the Dalai Lama, who was just a 15-year-old boy, was officially named the political and spiritual leader of Tibet. Soon after, in fear for his life, he was forced to flee Tibet over the Himalayan mountains into India.  He has lived in Dharamsala, India, the seat of the Tibetan Government-in-Exile, since 1960.

The Dalai Lama appealed to the United Nations and contributed to three resolutions adopted by the General Assembly in 1959, 1961, and 1965. He has also established educational, cultural, and religious institutions for the preservation of Tibetan identity and heritage.  He gives many public teachings around the world. He is a strong advocate for understanding and respect among different faiths and cultures with a consistent message of environmental responsibility, love, compassion, and kindness.

The Dalai Lama has been a member of PeaceJam since 1996.