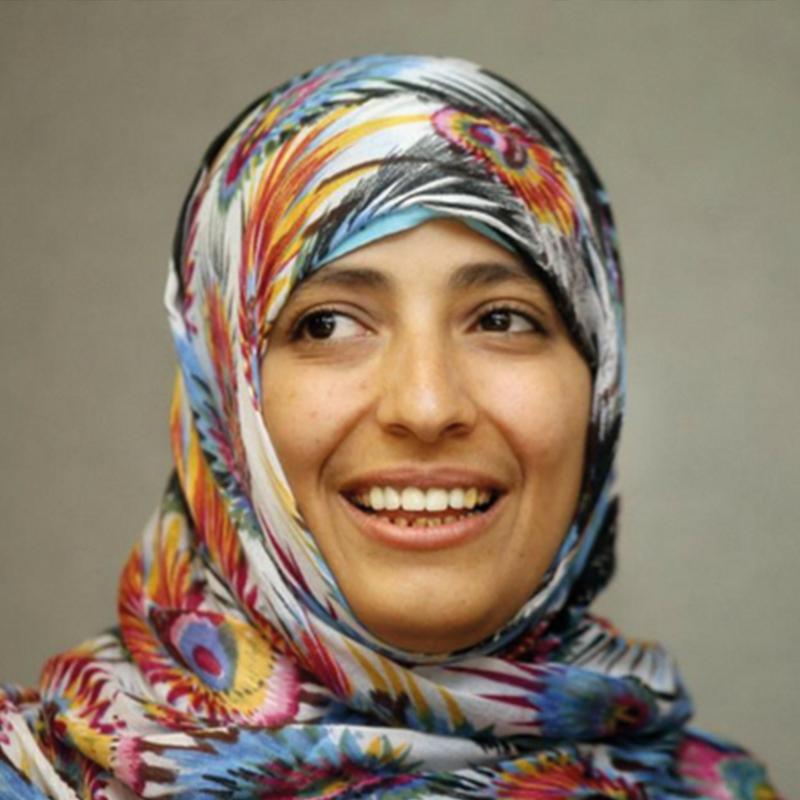 2011 Nobel Peace Prize-winner for her unwavering defence of democracy and justice in Yemen, and for giving women a role in the peace-building process.

Tawakkol Karman was born in 1979 in Taiz, Yemen’s third largest city. She grew up in a politically tumultuous country and witnessed the unification of North and South Yemen in 1990, followed by a civil war between the two in 1994, in which the North triumphed over the South. The civil war led to dissidence in the South as the repressive Northern government assumed control over the country.

A journalist by profession and human rights activist by nature, Tawakkol responded to the political instability and human rights abuses in Yemen by mobilising others and reporting on injustices. In 2005, she founded the organisation 'Women Journalists Without Chains,' (WJWC) which advocates for rights and freedoms and provides media skills to journalists.

In 2007, she began organising weekly protests in Yemen’s capital, Sana’a, focusing on systemic government repression and calling for inquiries into corruption and other forms of social and legal injustice. These protests continued until 2011, when she mobilised protesters to support the Arab Spring, a movement calling for government reform across the Middle East and Northern Africa.

Tawakkol was arrested several times, most notably on 22 January 2011 when she was accused of disturbing Yemen's peace and social security. She was set free after large-scale protests demanding her release. She has received death threats and been targeted by government campaigns attempting to discredit and silence her. Despite the threats and harassment, she always repeats: 'We do not fear the future -- we make it.' The first Arab woman to win a Nobel Peace Prize, Karman is known as 'Mother of the Revolution' and 'The Lady of the Arab Spring.'